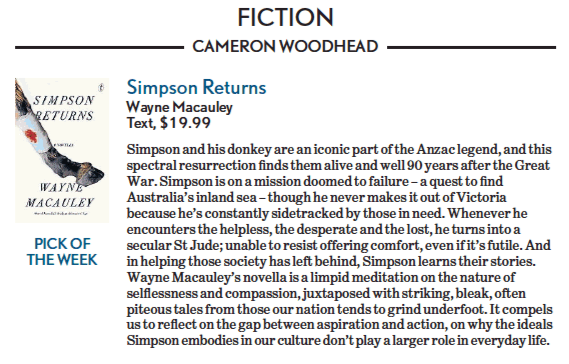 Reviews:
"Macauley’s use of an other-worldly narrative to bring real-world problems
into focus is probably one of Simpson Returns’s greatest strengths.
The help of a ghostly war hero and donkey, offered to those that we
seem to unnecessarily punish or deny help, becomes a fitting analogy for
the particularly cruel Australia in which we currently live.
Macauley’s novella has the sheen of a comedy, but it should
also be given credit for being so uncomfortably sad."
Chris Somerville, Readings Monthly

"Macauley is a mean satirist with a gift for finding the queasy depths
in apparently soft targets. In this book... the sweetness of the Simpson myth is
right there on the surface, which makes it a discomfiting vehicle for
the stories of the lost souls he meets along the way...
an unusual renewal of an ordinary myth"
Ronnie Scott, The Saturday Paper

"Macauley's novels are consistently savage critiques of Australian middle-class
delusions, and Simpson Returns is no exception. He brings considerable depth
to his portrayal of our social fragility and the destructive
all-pervasive darkness underneath. A must read."
Peter Donoughue, Booknotes

"Wayne Macauley's novella is a limpid meditation on the nature of selflessness and
compassion, juxtaposed with striking, bleak, often piteous tales from those our
nation tends to grind underfoot. It compels us to reflect on the gap
between aspiration and action, on why the ideals Simpson embodies
in our culture don't play a larger role in everyday life."
Cameron Woodhead, The Age

"Much has been written about Simpson and the donkey. But novelist Wayne Macauley has
re-cast Simpson in far more human terms than much of the early (and later pop) historiography,
as the eternal helper wandering through a later Australian landscape, social and geographic.
It is masterful and beautiful, and a triumph in thought-provocation. Macauley’s
Simpson Returns and Romain Fathi’s Our Corner of the Somme are the most challenging
and thought-provoking things I’ve read about Anzac since the
end of the profligate four-year centenary."
Paul Daley, The Guardian

"Wayne Macauley, long one of Australia's deadliest satirists... his sharp voice is still like a sip
of the Inland Sea in this Sky Newsaganda, post-even-half-truth era. Books like this may
amount to no more than a thumbtack on our master's chairs, but Simpson's
worthwhile return leaves the concerned reader fresh-eyed to the importance of
actually living up to, rather than just blowharding about, core values like
care and compassion, a fair go, freedom, honesty, trustworthiness,
respect, and tolerance. They should teach this book at school."
Alex Cothren, Australian Book Review

"Wayne Macauley, arguably Australia's finest contemporary literary satirist, uses the myth
of Simpson to show how far our society has diverged from the values for which he is celebrated...
As a parable, Macauley's Simpson is an Australian fusion of Jesus Christ and Don Quixote, miracle
and chivalry... In this novella, Macauley has expanded his command of the satirical register
and created fantastic insights into contemporary Australia and our relationship
with a myth we have failed, but whose cicada shell we still hold onto."
Ed Wright, The Australian

"Elegant... ingenious... A cynic might argue that works of fiction can never make a difference,
yet if we take an historical view we can see, again and again, examples of writers turning to fiction
in an effort to open minds that have become closed... Macauley’s works fit within this space...
The power of the writing rests in part through its understatement, yet also the skill through
which we are made to see things through inference... the decoctions of
Macauley’s fiction seep into our brains."
Anthony Uhlmann, Sydney Review of Books

Links:  Simpson Returns at Text
at Readings
at Goodreads